I made a thing! 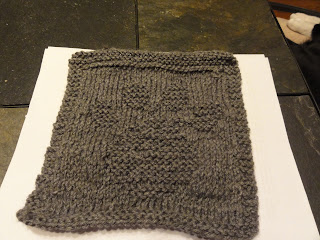 Yes, you heard me - I made something!  This was the start of my knitting journey.  A dishcloth paw print knit with size 7 straight needles and big box, clearance bucket acrylic yarn.  On a whim I bought a learn to knit kit from one of the big box stores - it came with a book, a pair of aluminum needles, and a bunch of accessories that I later learned were stitch markers, point protectors, a stitch holder and a row counter.  With that small find in a sale bin, and my 50 cent ball of yarn I learned to cast on, knit, purl, and bind off.  And therefore I knit a thing! 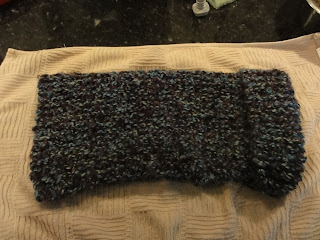 And if I could make one thing, I could make another - so more inexpensive yarn, a ton of online searching for free patterns (I had not yet found Ravelry) and I made another thing.  This thing was a rectangle that had two holes in it - and once folded and seamed it made a dog/goat/lamb coat.  I was just getting into goat breeding, anxiously awaiting my first kids, and thought I found the perfect thing to do.  Goat coats for my kids! 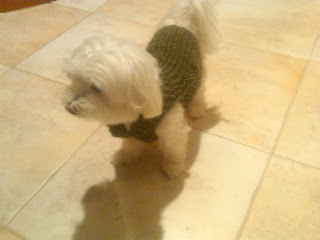 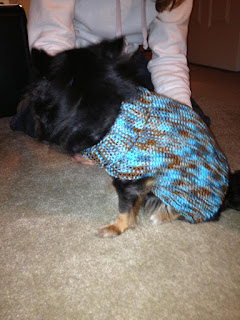 Once I determined that I was a "skilled" coat maker, every small dog in my circle of family and friends ended up with coats.  Many, many coats.  And the more I could find patterns for the more they goat.  And while I was proud as could be, the poor dogs were suffering through the modeling process.  All of this done with the same US7 size needles that came in the kit. 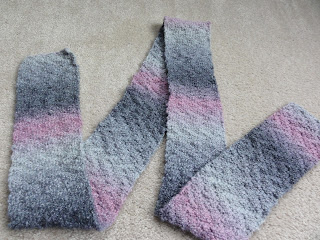 But then I saw a yarn while shopping that caught my eye and called to me.  It was Vanna White yarn - which makes me laugh since she's really known for her ability to turn letters on a game show, not for the fiber arts.  But I bought my first "expensive" ball of yarn - 2 of them in fact!  If only I knew then what I do now about fiber . . . . well, that's a post for another day.  But I spent weeks with this project, carrying it around everywhere knitting and purling and making a giant rectangle.  I was so excited when I finished it that I posted not juts a picture on my Facebook page, but the number of stitches and the time investment.  Funnier still as I quickly moved to giant lace shawls . . . . .

To this day that acrylic yarn scarf sits on my winter coat and gets worn.  And even with my evolution through the craft, I still like the darn scarf. 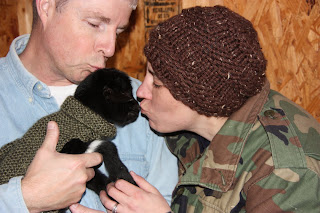 I did eventually get my newborn goat - and she did indeed wear a sweater.  By that time I had managed to make some hats as you'll note and I had a stack of sweaters waiting for this baby.  As a single kid and the first on the farm she was the best dressed kid on the block!

I look back now at my humble beginnings and then at where I am today - just a few years later - and I know I found my place in the crafting spectrum.  I do still make some rectangle projects, but they're usually more complex and refined. 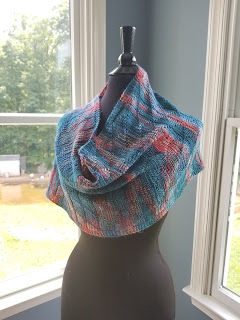 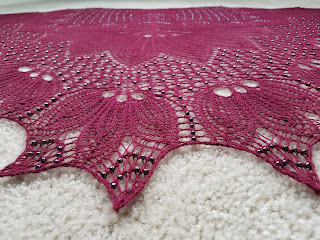 QD-Quadratische Decke Shawl done with Shibui Knits Cima in Bordeaux Every year I challenge myself to learn something new.  Two years ago it was complicated lace.  And just to put me to the test I added two additional aspects - beading and knitting from charts.  I was confident in my ability to knit basic lace, and I had taken on a couple of basic beading projects, so why not, right?  Well, let me tell you that this project scared the daylights out of me.  It's a Herbert Niebling adaptation by Hayley Tsang Sather and it was 31 pages of pattern calling for almost 1,000 beads and using 8 charts.  But I had my yarn, I had my needles, and I took the plunge. The project grew quickly, and as I became more familiar with the techniques and the beading, it went rather quickly.  It was certainly bead heavy up front, so I knew that if I couldn't handle this I'd be able to pull up early and call it quits.  Instead I became fascinated with the process. The more I 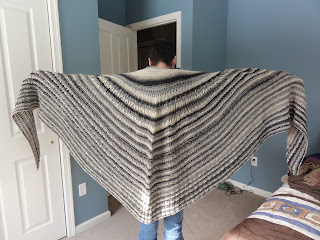 Accepting my Gauge (and myself)

When I started knitting I knew nothing and taught myself entirely by YouTube and Google.  Needless to say, phrases like "strangling your cast on / bind off", "check gauge for proper sizing / yardage", and "adjust needle size to gauge" completely stymied me.  So I ignored them. I soon learned that was a mistake.  Gauge matters.  Maybe you want to end up with a giant shawl like the one above, but the original pattern called for a shawl size of 106" by 35" and mine is clearly larger than that.  And while it doesn't matter for a shawl in terms of fit, perhaps you don't want a blanket sized shawl.  More importantly - you'll end up using more (or less) yarn than planned for. Here's the same shawl - I knit it twice, first because I loved it and second because I was sure I made some poor choices with the first version, namely the gauge. Still big, but much more manageable as a wrap that can be worn in public vs. a cozy wrap fo 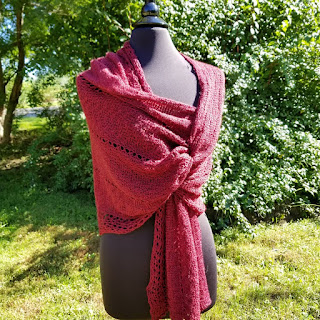 As so often happens with me, I start a bright new adventure with strong plans and big ideas, and then life gets in the way.  I woke early this morning and the muse struck to put a new post together.  I was a bit taken aback to see that it's been almost 3 months since my last post.  The plan was to do a short post every week or so - how did I lose 12 weeks?  Oh yeah, it was summer.  And we relocated the farm.  Yep, that'll do it. So now, as the weather turns to fall, I reflect back on a crazy summer that put me through the ringer and realize that despite it all my knitting kept me sane and was a continuous thread throughout.  I finished several large projects, kept up with the monthly shawl KAL and met all deadlines.  I submitted my work to the county fair and took home a few ribbons, and I visited the Garden State Sheep and Fiber festival, exploring Angora rabbit wool and learning how to spin with a drop spindle. All in all, that's a pretty good summer!  And wit